February 19, 2019, WILL hired Miles Bent as the new Program and Communications Manager.

June, 2018, WILL’s Steve Abraham was elected President of the Landon School Alumni Association Board of Directors.

June 12, 2017, WILL is elated and honored to have been selected to be re-featured in 2017-2018 Catalogue for Philanthropy, to have been in the Catalogue since 2012, and to continue our partnership with the Catalogue as one of the best community-based nonprofits in the Greater Washington region.

December 6, 2016, WILL selected for 2017 Compass Micro-Project focused on Board Development.

May 2016, WILL is thrilled and honored to have been selected to be re-featured in 2016-2017 on the Catalogue for Philanthropy’s website, to have been in the Catalogue since 2012, and to continue our partnership with the Catalogue as one of the best community-based nonprofits in the Greater Washington region.

August, 2013. Steve Abraham, WILL Founder and President was featured in the DC Alliance of Youth Advocates (DCAYA) August Newsletter.  Follow this link and scroll down to  “Member of the Month” to read the interview with Steve.

July, 2013. Steve was invited to be a guest blogger by Education to Save the World as an “innovator who creatively seeks to make the world a better place.” Read his blog about WILL and its impact at http://edtosavetheworld.wordpress.com/2013/07/26/how-i-innovate-wilderness-leadership-learning/

July, 2013. In 2013, The North Face Explore Fund received more than 500
requests for funding. WILL is pleased and honored to be 1 of the 30 organizations to receive The North Face Explore Fund Grant. The Grant supports organizations or projects which are dedicated to getting more youth outside, connected to nature, and understanding the importance of environmental stewardship.

April 2012. Boston University’s Center for Digital Imaging Arts – DC Campus  taps WILL for Spring Website Design Practicum resulting in a wonderful new look for WILL on the web. Many thanks to Jared Czerew, Kanon Kennedy, Mary Harrington, Nico Staple and to the CDIA faculty and staff, especially Meaghan, Jim, and Seth. 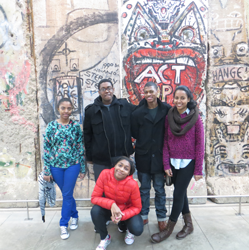